The Presidents House was a major feature of Pierre Charles L’Enfant’s 1791 plan for the city of Washington. He envisioned a vast palace for the President, a house five times the size of the house which would be built. It was planned and constructed under the personal supervision of President George Washington. Design of the White House and Capitol would be determined by separate architectural competitions in 1792. James Hoban, an Irish-born and trained architect then living in Charleston, South Carolina, won the design competition for the White House. He designed the White House as a grand mansion in the neo-classical Federal style, with details that echo classical Greek Ionic architecture. James Hoban’s original design was modeled after the Leinster House in Dublin, Ireland, which is now the seat of the Irish Parliament, and did not include the north and south porticos. 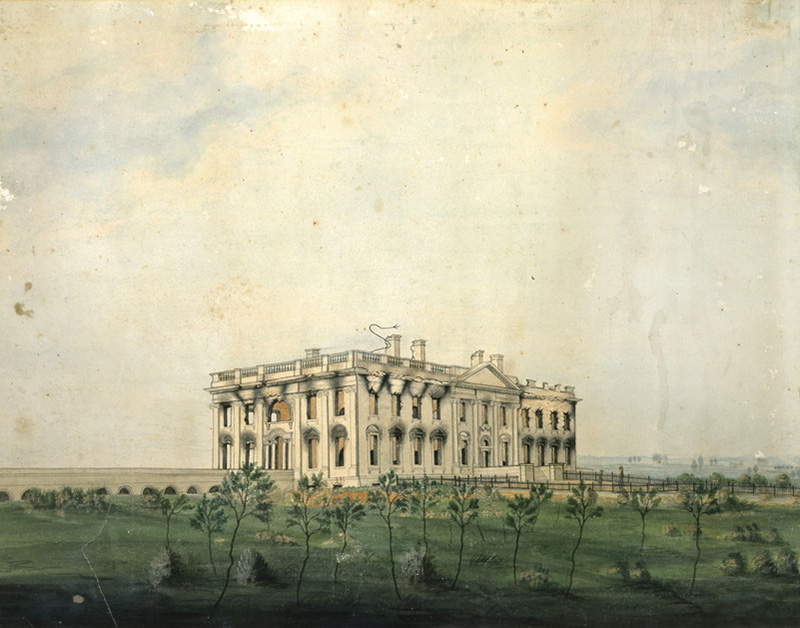 Engraving of the White House by William Strickland

On October 13, 1792, George Washington laid the first cornerstone of the building in a freemason ceremony. Scottish masons were brought to Washington to do the stone work. Their technique for sealing the porous sandstone was a thick whitewash that covered like paint but sealed like glue. So, from its earliest days, the president’s house was white, and it quickly got the nickname “White House.”

When John Adams moved into the President’s House on November 1, 1800, it was far from complete. He used the second floor as his residence and the ground floor was used by servants as kitchens, laundry, and housekeeping rooms. Today’s Diplomatic Reception Room was originally the housekeeper’s room, with built-in cabinets. The Adams’s began furnishing the house in a fairly grand style, although Abigail Adams used the great Public Audience Chamber for hanging laundry. Thomas Jefferson regarded the mansion as overly-grand and considered not moving in at all, though he ultimately did. Among Jefferson’s first acts was to have toilets built in the upper floor to replace the outdoor privy. It was Jefferson who turned the north side into the main entrance. He created a wilderness museum first in the East Room and then in the Entrance Hall, with mounted animals and Indian artifacts. Jefferson also added onto the house. Architect Benjamin Henry Latrobe designed pavilions that were built east and west of the mansion to house servants and stables. He also had a revolving cabinet built in the Public Dining Room (today’s Family Dining Room) similar to ones he had in Monticello.

Hostilities with Great Britain, begun in 1812, culminated in the invasion of Washington on August 24, 1814. British troops entered the defenseless city, where they ate a dinner prepared for the President at the White House, and then torched the building, destroying all but the outer walls.

Stay tuned for tomorrow’s continuation of the History of the White House Series.

Happy 4th of July! The Presidents House was a major feature of Pierre Charles L’Enfant’s...

Happy 4th of July! The Presidents House was a major feature of Pierre Charles L’Enfant’s...